In order to provide consistent user experience across many warehouses, Hevo uses a Name Sanitizer system. It applies to the names of the table and columns created in the Hevo ecosystem. It does this by encouraging the use of a simple, consistent, readable vocabulary when naming the tables and columns. To achieve that, Hevo’s Name Sanitizer removes all non-alphanumeric characters, spaces in between the names and replaces them with rather a suitable character, underscore. We’ll go deep into how it works with each warehouse in particular. Before that let us understand when it is applied to these names.

When are Names Sanitized?

How are Names Sanitized?

In this section, we’ll look into how Hevo’s Name Sanitizer performs with each warehouse.

However, when a user tries to create the table manually, name sanitization does not apply and it is converted to table$name_05_, making it to lowercase. When a Redshift Destination is configured with sanitization being switched off, it doesn’t do anything apart from making it in lowercase. The table, in this case, is created with the name table$name_05_. This is important to Redshift because a table can’t be created with upper case characters by default. You can check their Developer Guide to know more about naming database objects. The same behavior is followed for columns.

In the case where Hevo AutoMapper is trying to create a table in Google BigQuery, the sanitizer will convert the table name into lowercase, replace all non-alpha numeric characters with an underscore and remove the trailing underscores. For example, if the Source Event Type name is Table$namE_05_ it is sanitized to table_name_05, replacing the special character $ with an underscore and removing trailing underscore. According to the Google BigQuery reference guide for naming tables, it is not possible to create a table name with special characters. Hevo prompts with an error message when a table with the name, Table$namE_05_ is tried manually on Hevo UI. The same behavior is followed for columns.

Hevo’s Name Sanitizer for Snowflake is designed in such a fashion that the Hevo AutoMapper creates all the tables and columns in uppercase, replacing special characters with an underscore and removing trailing underscores. For example, if the Source Event Type name is Table$namE_05_ it is sanitized to TABLE_NAME_05, replacing the special character $ with an underscore and removing trailing underscore. However, when it is tried manually a table/column will be created in uppercase.

When name sanitization is switched OFF for the Destination, Hevo’s Name Sanitizer doesn’t affect naming and it doesn’t replace the non-alphanumeric character or the trailing underscores, and a table with name, Table__$namE_05_ is created. However, when it is tried manually, a table with name, table$name_05_ will be created.

What Happens to Field Separators and Delimiters?

If a . is used as a field separator, for example, first.list, this becomes first_list post sanitization, and is read as two words by Hevo, first and list. This is an important consideration for deciding the table name compression strategy. If name sanitization is disabled, first.list is read as one word since the compression strategy does not recognize . as a separator. 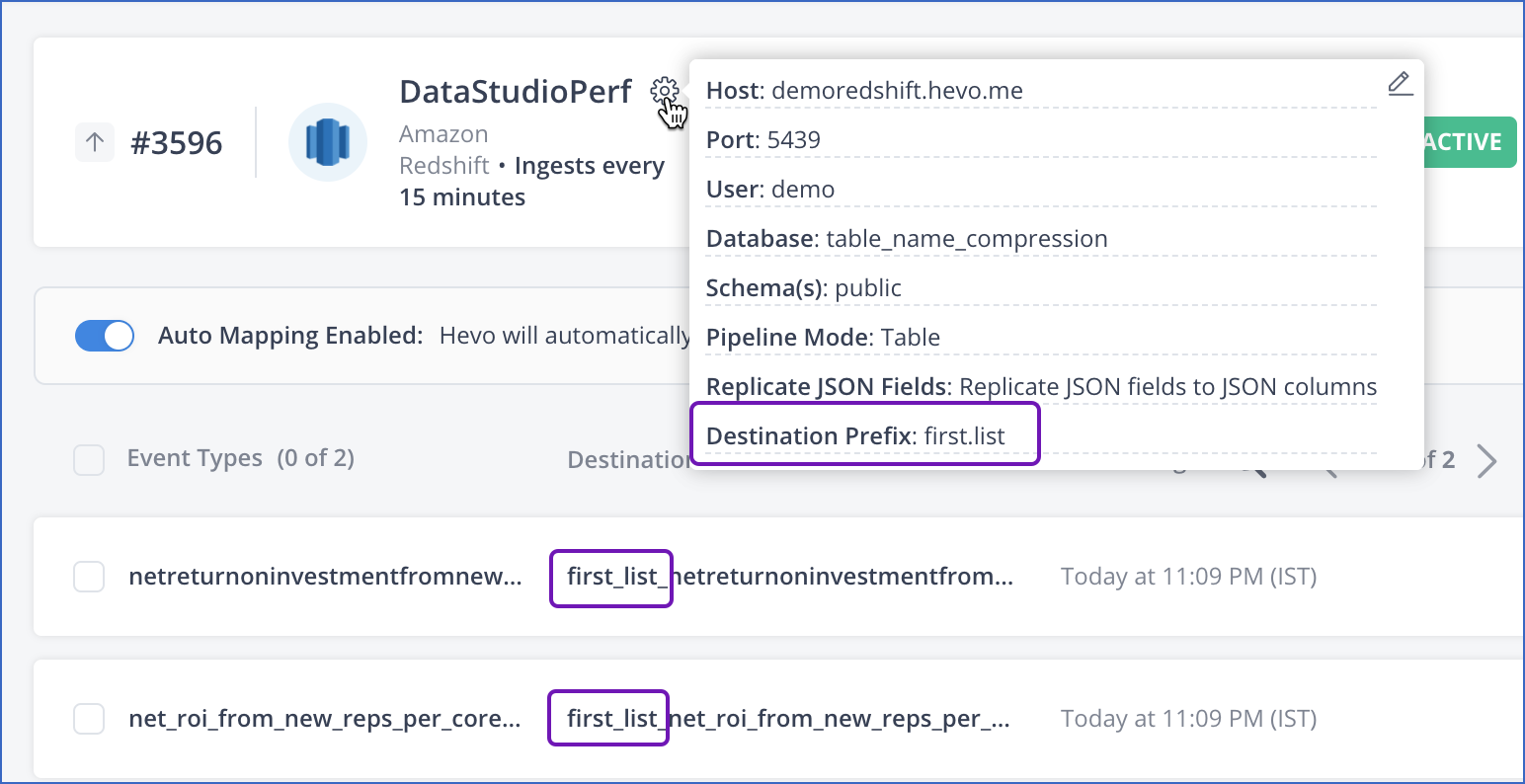