To load JSON-formatted Source data to the Destination, you must select how Hevo must parse the nested fields, objects, and arrays so that these are read correctly. The parsing strategy depends upon the Destination type and is independent of the Pipeline mode or the data Source.

You can select the parsing strategy as the last step of creating your Pipeline. If only one strategy is available, it is applied by default and no selection is required, as in the case of Amazon Redshift, Aurora MySQL, MySQL, Postgres, and Snowflake Destinations. 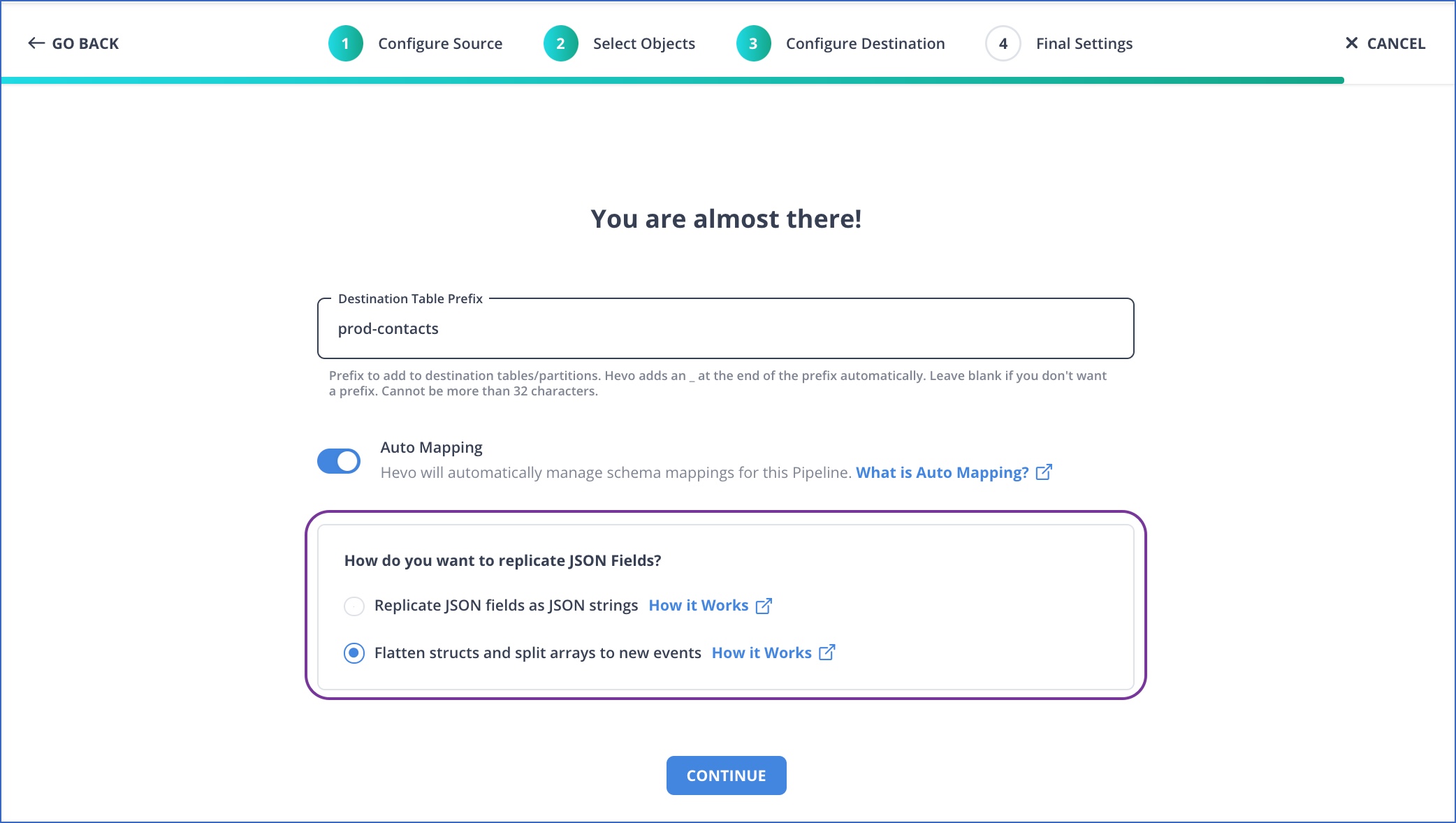 The following table lists the parsing strategies that Hevo supports for each Destination, the first option being the default one in each case:

Consider a sample orgs object that contains multiple fields, child objects, and arrays in different nesting orders. Its format in different Sources is illustrated below. The example explores how this data is replicated based on the parsing strategy that is selected.

The following is the orgs object as it appears in MongoDB:

The following is the orgs object as it appears in Sources such as MySQL and PostgreSQL:

The following sections help you understand how the replicated data appears in the Destination based on the different parsing strategies:

In this strategy, nested JSON fields are collapsed and serialized as a JSON string of type varchar.

Strategy: Replicate JSON structure as is while collapsing nested arrays into strings

This strategy is used only in case of Google BigQuery Destinations, as it offers specialized support for JSON and also enforces the need for a well-defined schema for the fields within a record.

As seen in the image below, the Source JSON format is retained for all the fields and well-defined arrays.

Now, suppose the following record is added to the Source data:

Here, the contact array within the address object has differing counts of phone numbers. Such non-uniform arrays are collapsed into a JSON string, as shown below.

Strategy: Replicate JSON structure as is while collapsing arrays into strings

In this parsing strategy, the JSON structure of the Source data is maintained except for arrays, which are collapsed into JSON strings.

This strategy is used only in the case of Google BigQuery Destination with the following specific Sources:

For the Sample Data Structure 1 above, the Source JSON format is retained at the Destination for all the fields and well-defined arrays.

Each JSON object or array is ingested as a separate Event Type, and a new table is created for it in the Destination. The child Event carries the property __hevo_ref_id, representing the identifier of the parent object. In addition, the parent object name is prefixed to the Event name. In this structure, each key:value pair holds only one value.

Note: In case the Source table does not have a primary key, then this strategy is not used but the parsing defaults to the Collapse strategy. This is done because there is no primary key to reference in the new Event Types.

The following image illustrates the tables that are created in the Destination for the orgs Event Type and its child arrays:

The following image displays a sample of the replicated data for the flat_orgs object:

The following image displays a sample of the replicated data for the flat_orgs_contact object:

While this format appears similar to the Replicate JSON Fields as JSON Strings parsing strategy, additional metadata is maintained by the system to differentiate the JSON and String data. This metadata is useful while writing the data to appropriate columns (optimized) in the tables of the Destination warehouse where both JSON and String data types are supported.

As seen in the image below, the address and contact objects are replicated as separate JSONs.

Tell us what went wrong